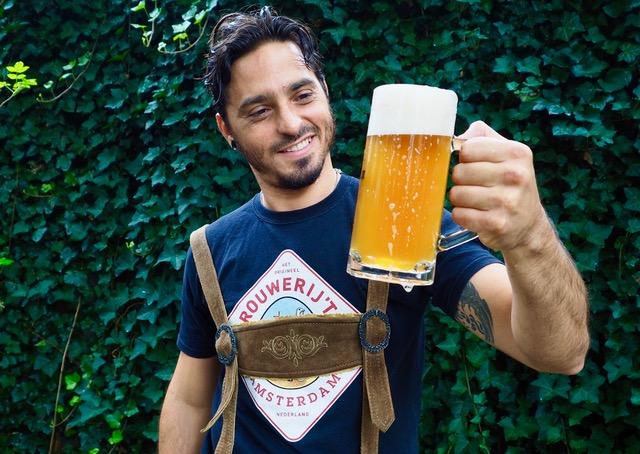 Our brewer Arvin hails from the Caribbean island of Aruba and he’s crazy about German beer. It all started with his father-in-law who, located close to the border, would take him on trips to Germany in order to stock some beer. The appeal of these beers? “ They taste sooo good and you can drink lots of it without getting too drunk”, Arvin explains. His appreciation for the German brewers only grew after he became a brewer with us about two years ago. “These guys really know how to brew, you just can’t go wrong with their beers.”

Once he had the chance to develop his own beer with us the choice for the style was an easy one. Arvin aimed for the type of beer in which malt and hops are equally balanced. “Does anyone know how to do this better than zhe Germans?”

Kellerbier
Arvin opted for a Kellerbier, a German style that resembles the pilsner in taste and, sometimes, appearance. Kellerbier is unpasteurized and unfiltered and as a result of the latter it has a slightly cloudy character. Within this style, two varieties are distinguished. The Helles is the lighter of the two and looks somewhat like a cloudy pilsner. The Marzen is the amber coloured version. The name derives from the month of March, the time of year around which this beer was traditionally brewed with the barley of an early harvest. After brewing, it was stored in a cellar during summer in order to ceremoniously be consumed around October.

Arvins Kellerbier blends characteristics of both types as he doesn’t like to ‘brew within a box’, as he states. Except for the fact that it should be lagered or stored in a cellar for a while, the definition of a Keller beer isn’t very tight so Arvin could afford a few liberties. His brew is somewhat darker than a Helles, but not yet amber. Its bitterness would be considered a bit too high for a Helles but would be qualified as low in its amber coloured counterpart.

German ingredients
Aiming for the high quality of his beloved German beers, Arvin picked only German ingredients as “you don’t brew German beer with Belgian malt”. Following that philosophy he ordered the German noble hops Tettnang and Hallertau Mittelfrüher. Whereas we normally brew with our own, prominent, yeast, Arvin used a German variety which ferments slower than our own and results in a far less dominant profile. Only the water in this beer isn’t German.

The aromatic hops he ordered from Germany had to be present but not dominant and therefore Arvin soaked them a little just before boiling. As a result, the hops nicely balance the sweet influence of the malt without the prominent flowery hoppiness that is the result of just shortly boiling them. Hence the desired balance between bitter and sweet was achieved and you’ll taste subtle layers of both malt and hops in this beautiful beer. While it is a mouth full of taste it has the uncomplicated freshness of a good pilsner. We therefore named it after the German brewers, the unsung artists of fresh yet subtly layered beer – and after Arvin, whose last name is Geerman: Zhe G(e)erman.

If Arvins enthusiasm got you curious about German beer, then where should you start? “It doesn’t really matter what you drink in Germany”, Arvin states, “it’s all so good out there…” But if the choice is overwhelming, he advises to focus on the label. “Spot one with some old-fashioned stuff on it, a little story you can’t make sense of? Can’t go wrong.”

Favorite German beers
Arvin is like a kid in a candy store when shopping for beer in Germany and if he could he would carry all he sees to his father-in-law’s car. But, pressed to make tough choices, he often grabs beers from the following breweries.

In Amsterdam, the choice is easy for now as we’ve got Arvins Zhe G(e)erman connected to the taps of our tasting room.

As the Germans say: Bis bald!