Brouwerij ‘t IJ has been brewing quality beers since 1985. It all started when musician Kasper Peterson looked for an official outlet for his experimental home brewing. As a member and composer of the band Door Mekaar, he fell in love with the Belgian style beers while touring south of the Dutch border. Since similar beers were not yet brewed in Amsterdam, Kasper decided to produce them himself.

Searching for a suitable building to start an official brewery, he stumbled upon an old municipal bath house in disuse. It still had its water supply and drainage system, easy-to-keep-clean tiles and steam generator. It was, in short, the perfect building for a brewer. As a bonus, it had the biggest wooden windmill of the Netherlands right next door as the ultimate landmark.

The pioneering paid off and ‘t IJ gradually grew into the biggest and best known brewery of Amsterdam.

After more than twenty years, Kasper decided his work was done. Bart Obertop and Patrick Hendrikse took over and continue brewing the distinctive kind of quality beers ‘t IJ has become known for.

Since demand was so much higher than supply, a new brewery was opened at a mere 700 meters from the original location in 2013. The original brewery at the Funenkade now produces all the beers for consumption in the bar in the same building. The new facilities at the Zeeburgerpad enable us to fill a significantly increased number of bottles and kegs. We manage to keep up with demand a little better and are still able to offer you an exciting experimental brew occasionally.

Our range changes slowly over time. In 2015, Brouwerij ‘t IJ and Duvel Moortgat entered into a partnership for support in areas such as brewing technology and distribution, as well as financial strength. 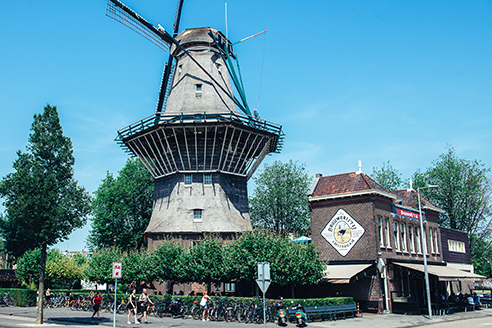