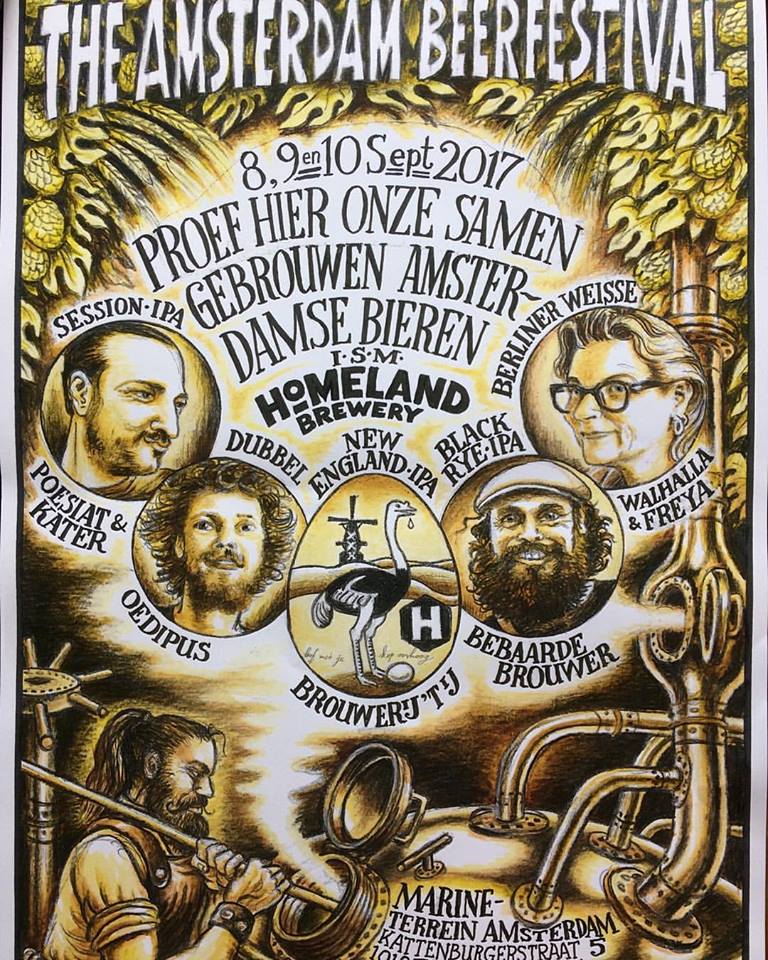 Even more so than last year, this year´s edition of the Amsterdam Beer Festival, truly lives up to its name. As last year, the majority of participating breweries hail from Amsterdam but this time a number of them brewed a beer especially for the event. The Homeland brewery, the driving force behind the festival, also initiated these brewing sessions and took part in them.

With Poesiat & Kater, Amsterdams newest brewery, Homelands Erik brewed a session IPA for the festival. Together with Oedipus he produced a dubbel while he teamed up with Walhalla for a Berliner Weisse. With the Bebaarde Brouwer, from Rotterdam, a black rye IPA was added to the row of collabs. Erik also visited our very own brewery to create a beautiful New England IPA.

New England IPA
The experts disagree on whether the New England IPA should be considered a style all its own but it is sure it is all the rage right now. Understandable, given its appealing hazy yellow and firm yet flowery hoppiness. We stuck with these characteristics for our Homeland collaboration to brew a beautiful new beer.

For those who can´t wait to taste it, it is already available at our very own bar. Just as nice: wait a little and compare it with the other four Homeland collabs. They are all available during the second weekend of September at the festival grounds, Amsterdams former marine base.

The line-up
Besides Homeland and its collaborators, a number of other interesting breweries also come over to pour their beers from the 8th till the 10th of September. The Kaapse Brouwers from Rotterdam, Amsterdams MoreBeer, the Italian White Pony Brewery, the experimental Danes of To Øl, the Dutch-American Lagunitas and the Insel Brauerei, from the German island of Rugen.

The Amsterdam Beer Festival is more than this appealing brewery line-up. You are allowed to enjoy the music and dance. We look forward to this happy affair just around the corner. Watch the video below for an impression of what it was like last year.

Want to secure a ticket, glass and token already? Book them here in advance.