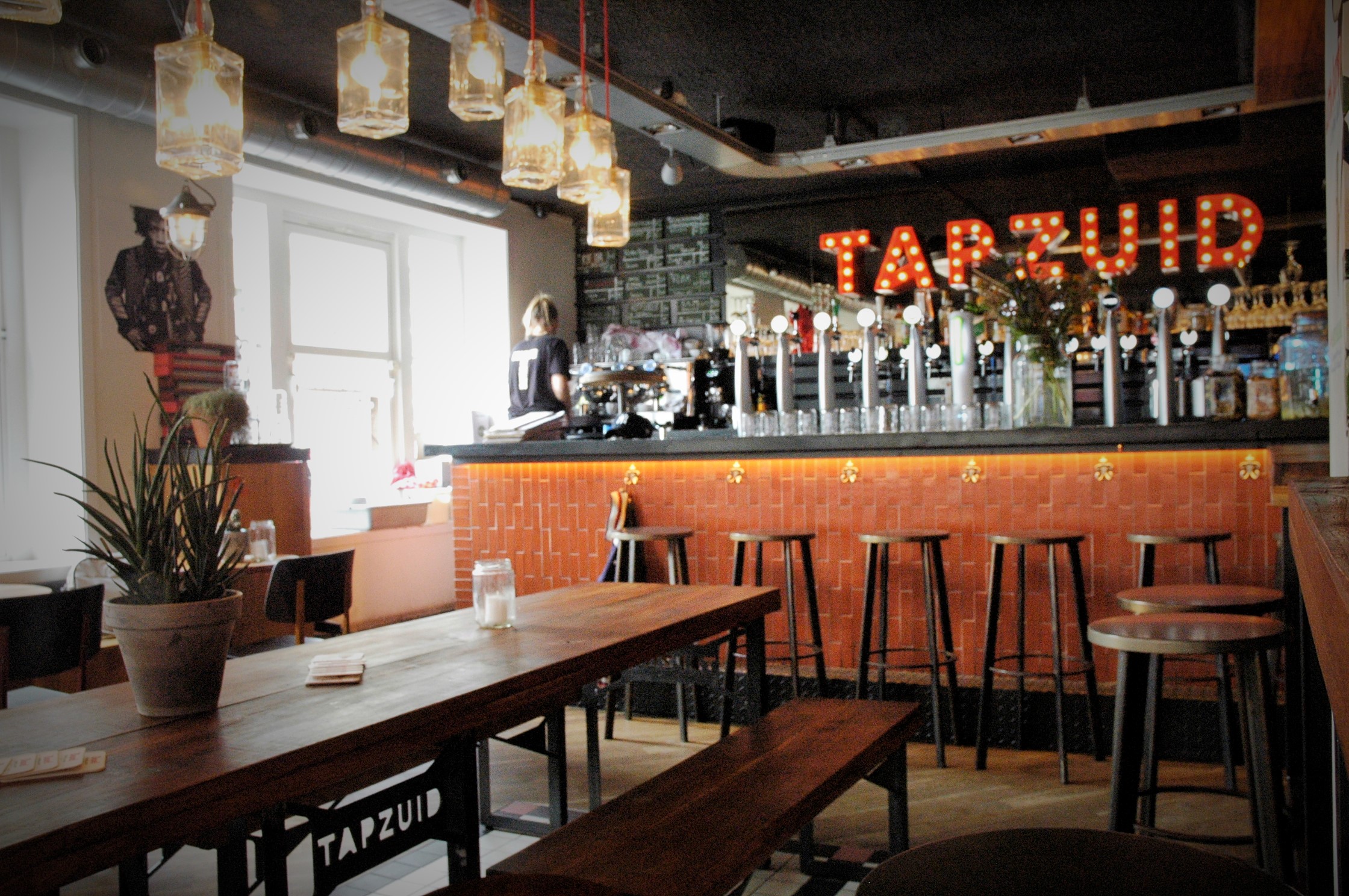 To our delight, an increasing number of cafes pours our beers. Some just joined the club, others have been loyal customers for years. In this edition of our cafe series, an impression of a bar that supplies a wine loving part of Amsterdam with excellent local craft beer: Tap Zuid. Certain parts of a city tend to house more wine than beer drinkers. Amsterdams Rivierenbuurt could be considered such a neighbourhood. Craft beer, however, has ventured deep into this calm, classy area too. New bar Tap Zuid supplies the locally crafted beers that are in ever increasing demand here.

Owners Len and Remco already ran café Goos, a few doors down the road. They would try to stock all the local beer their customers inquired about but quickly ran out of space. When the restaurant with massive cellar abandoned the corner on the same street, the partners were quick to grab their chance. They enrolled in a beer sommelier course and hired a Belgian expert, planning to turn this into an eatery with a very serious beer menu. They initially aimed for a balanced mix between the best local and international beers. But the weight of popular demand had the balance tip in favour of the former. Most of Tap Zuids 25 taps pour beer brewed in or near Amsterdam.

Most of these beers are personally delivered by their brewers. “They all bring it themselves”, Len smiles. It costs him his wholesale discount but he doesn’t care. He prefers the face-to-face interaction with the guys whose beers he sells. “When Nando, from Pampus, comes by and tells me his stories, I’m having a great time.”

After the brewers delivered them, the kegs are stored in that spacious cellar. Tap Zuid offers you a peek at everything in store with a big window downstairs. “We took that idea from the BrewDog pubs.” The rest of the interior is mostly inspired by Berlage, the architect that laid down the plan for the neighbourhood and whose preference for plain materials is evident in the stylish design and furniture.

Tap Zuid opens early in the afternoon and closes at night and the good thing is that the kitchen is open as long as the bar is. It supplies with all the bites you might like to combine with a tasty glass of tasty craft beer. Cheese, burgers and fancy flammkuchen, to mention a few.

No wonder Len looks pretty content while he is sipping from a glass of local Berliner Weisse. A grey-haired lady with a cane shuffles in and greets him familiarly. She nods towards the glass in his hand, then waves towards the list of 25 beers on the wall. “You tried all of this already?”, she asks. “Working on it”, smiles Len. “It’s crazy”, she says and shakes her head.