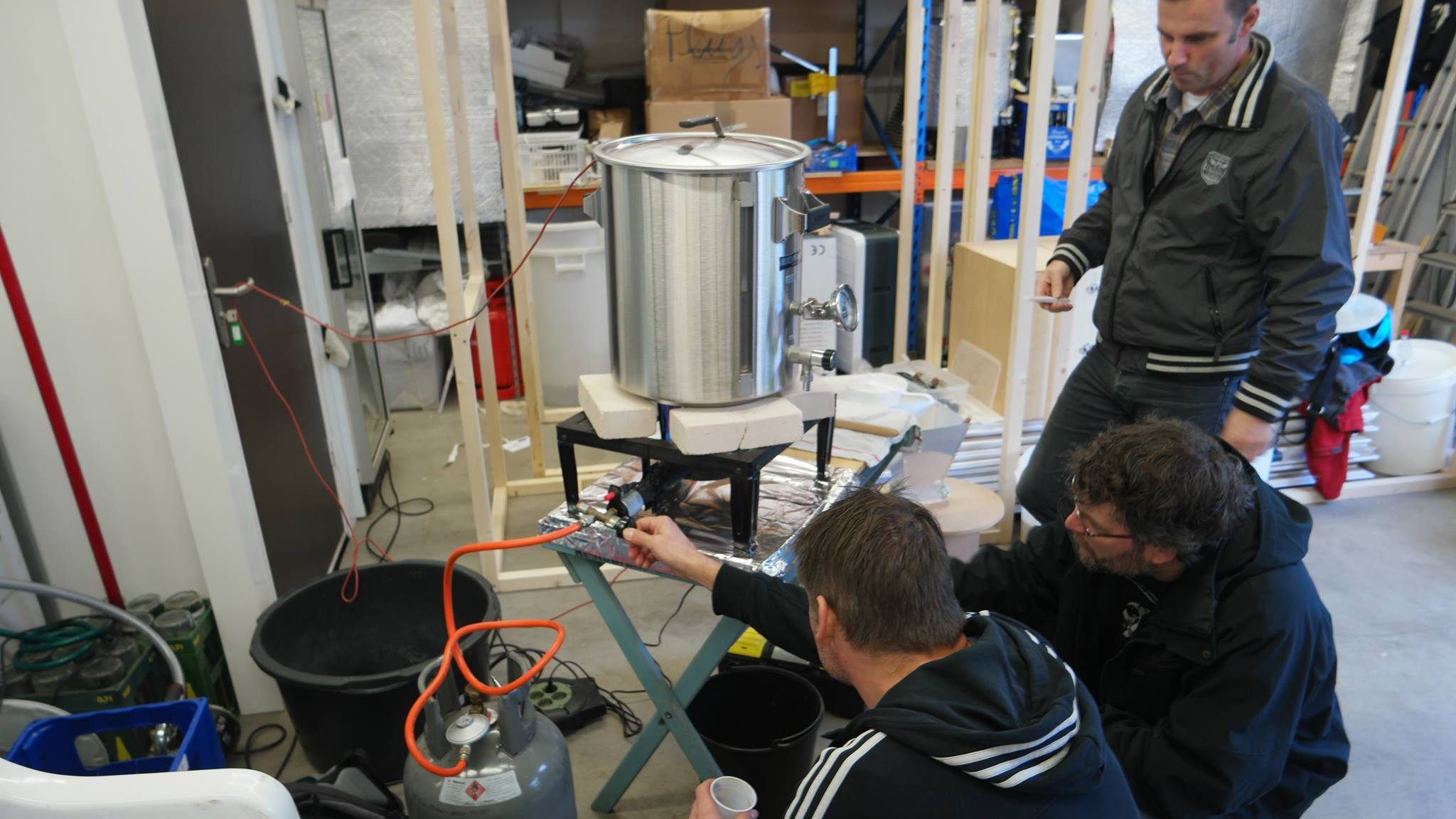 A night with the guys of Amsterdams homebrew society

In an unexpected, red neon lit basement of the Homeland pension, a bunch of guys have gathered. They talk about beer, or rather, the techniques behind brewing it. They exchange tips. “What I always do..”, a guy starts explaining his filtering method. Their get-together forms the latest episode of the society’s brew course. Participants brought the beers they brewed according to their very first own recipes. Their fellow home brewers will evaluate the results. They fill in forms, rating the brews colour, smell and taste. They raise their glasses against the light, sniff their content and then expertly sip it.

Countless busses for ingredients
Not everyone attending is a beginner. Some of the Bierkaai’s members have been brewing for a couple of years. Some for decades. Ronald Opsomer dates from the time he had to travel to Amsterdam in countless different busses for hours, in order to acquire his brewing ingredients. “Are you cold, boy?”, they would say when he arrived. “They’d give me a cup of tea and then I returned.” Much has changed since the mid-eighties. “A few clicks online and it all arrives in no time at all.”

Ronald also found his fellow co-founders of the society online. The people discussing home brewing matters at an online forum yearned to meet in person. To their dismay, they found there were no structures for brewer meet-ups in place yet.

Chaos in the brewpub
Eventually, a hand full of Amsterdam home brewers gathered in the De Prael brewpub. “It was chaos”, Ronald remembers. Twenty people turned up for the second meeting. “Even more chaos.” The efforts to channel this chaos into a productive home brewing collective eventually resulted in the establishing of De Bierkaai. It is Amsterdam’s very first and only official home brewing society. The beers the members taste tonight were brewed during the course of about five weeks earlier. As a result, some of the more experienced brewers among them comment on how “young” these beers still are. They advise the novices to store their brews a couple of months longer. They might be critical when it comes to beer, the experts tend to evaluate the brews of their less experienced colleagues mildly.

“You can learn a lot from this”
Still, a brew with a very unpleasant metallic taste gathers some very low grades. Odd, since another beer, brewed according to the same recipe, tastes just fine. The first is clearly oxidized. Could have happened during the transferring of the beer, someone offers. Or during the bottling, suggests another. “You can a learn a lot from this”, concludes an experienced brewer approvingly.

The latter admits have downed his very own brews rather reluctantly himself. “I would  probably have drained it now.”  He has improved. Fellow home brewers eagerly queue up for the IPA and the Russian Imperial Stout he brought along tonight. Other also bring out the results of their home brewing efforts. Bottles labelled with a marker or, occasionally, colourful handcrafted labels. Sharing them proves a great recipe for a lot of fun brewing talk to close the evening.

A night with the guys of Amsterdams homebrew societyFriday, December 16, 2016Daisy Altelaar
0