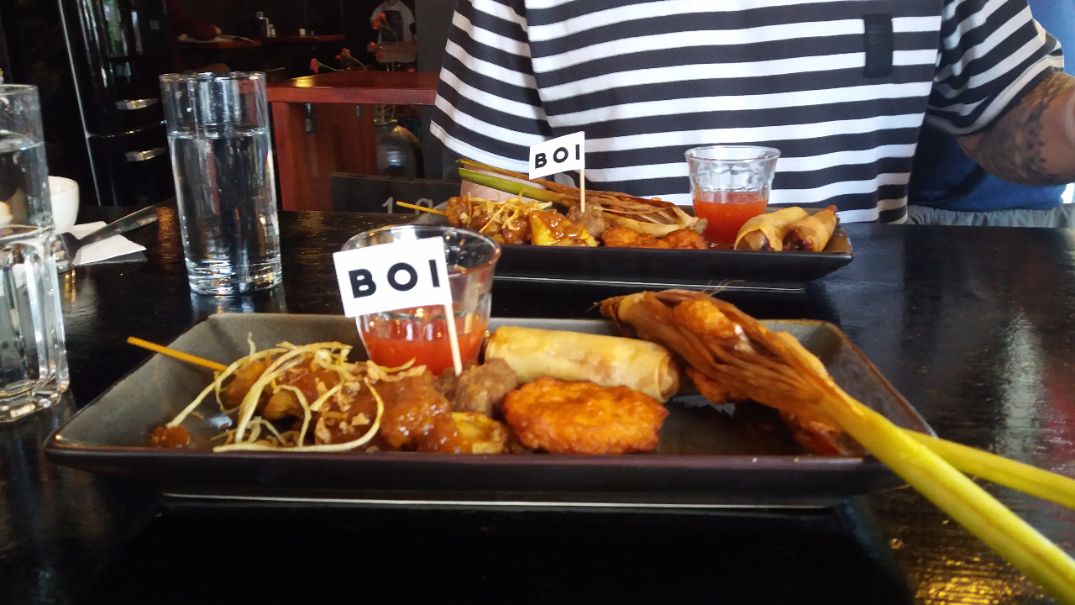 The closing of our pub at eight often comes as a blow to many. With the prospect of a night full of tasty, affordable beer suddenly shattered, most newcomers realize it might actually be a good time to get some proper food. But where? Tip: Boi Boi, funky Thai restaurant just around the corner.

Boi Boi is easily spotted after the bustling market on the Dapperstraat has closed for the night. The bold patterns on the window make this restaurant on the corner stand out and that is exactly what it wants to do.

Screaming monkey
Chef Kai and his partner aimed to break with the conventions of the regular Thai restaurants around town. No smiling Buddha but a screaming monkey for a logo, raw, arty patterns in black, white and red all over the place, instead of orchids for decoration.

The furniture is set to should stimulate interaction. The high, long tables tend to foster a sense of community among Boi Boi’s guests. Anyone who ever spend some time on our terrace knows this is a winning concept.

Minimalist monks
But the main reason we send you here is the food. Great Thai cuisine, all home-made with most of the ingredients purchased at our beloved Dappermarkt. Kai specialized in the Isan cuisine of north eastern Thailand, a style that aims for rich, complex taste through basic cooking. Boi Boi prides itself for its resulting no-nonsense dishes. Ultimate form of this approach is its jay food, the staple food of Buddhist monks, who extend their minimalist approach to life to their cooking as well. Call it vegan, they say at Boi Boi.

In their mission to connect with their neighbourhood as much as possible, the people of Boi Boi soon ended up at our doorstep in search of beer. Our IPA and IJwit turn out to be great beers to pair to a yummy plate of Thai food. We think that sounds like the best of two worlds but those who desire a complete Thai package, can opt for a bottle of Singha or Chang beer as well.

Take-away
Can’t get enough of this? They opened a take-away next door, the name of which sounds like our recommendation in a peanutshell: GoGo.