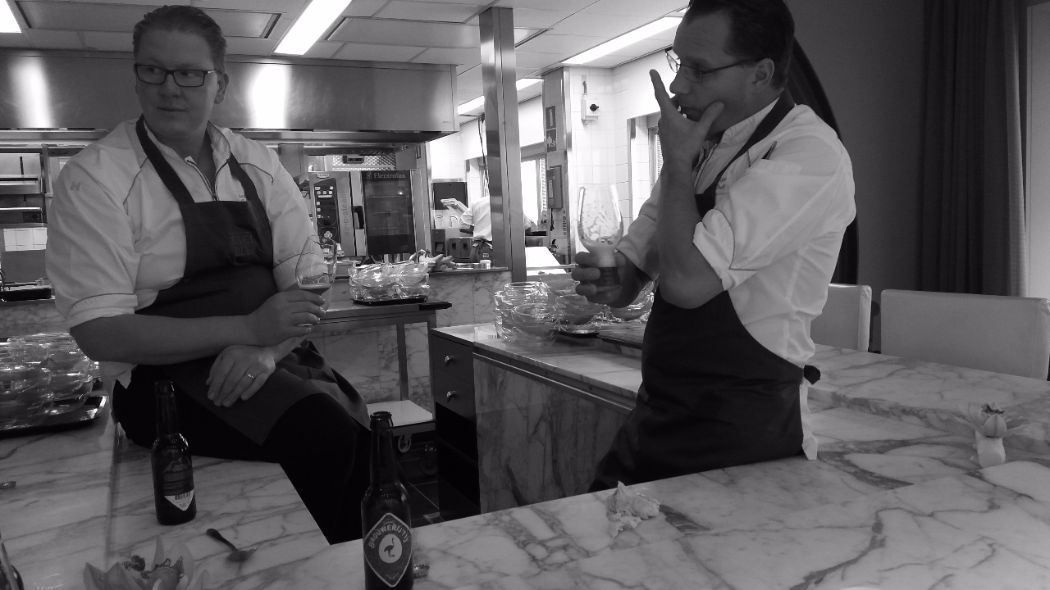 We brewed another new beer with the chefs of Ciel Bleu

Since our previous collaborations yielded real tasty results, we brewed with the chefs of the two star restaurant Ciel Bleu again.

Arjan Speelmand and Onno Kokmeijer know an awful lot about creating great taste. An additional advantage of brewing with this culinary duo is that they are not hindered by too many ideas of what a beer should be. Without them we would probably not have added kaffir lime, chocolade and galanga to our beers, the way we did during earlier collabs. Their ongoing quest for new flavour and our ability to turn these flavours into solid beer has resulted in something beautiful again. We opted for a double IPA. This might suggest heavy hitting hoppyness but the Ciel Bleu Double IPA is a remarkably soft beer.

But after that surprising soft first sip, a nice bitterness reveals itself. Not that kind of wry bitterness you might know double IPA’s for, but a milder, layered kind of hoppyness.

As with our previous brews, we saluted the renowned Japanese Okura hotel which houses the Ciel Bleu restaurant, by adding some Asian citrus fruits. We squeezed some Sudachi, a Japanese kind of lime, and grated some Buddha’s Hand, another Asian citrus variety.

Those citrus flavours are as subtle as is the hoppyness of this beer. Together, they endow this light bodied beer with interesting layers of taste. Its light colour has a touch of amber, its alcohol percentage stands at 7.4. An interesting and accessible culinary treat. Once again. We brewed another new beer with the chefs of Ciel BleuSunday, November 13, 2016Daisy Altelaar
0