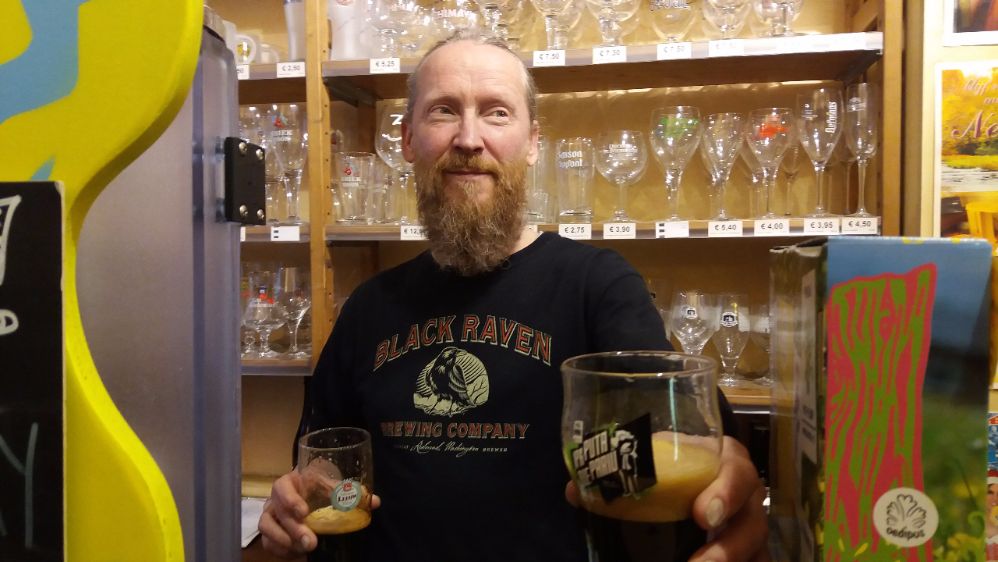 There was a time, not too long ago, when Dutch supermarkets almost exclusively sold pilsners. A sad affair that alternative types bravely resisted. They imported more exciting beers, mostly from Belgian and sold them in their respective shady circuits. This made people so happy, a legal outlet soon popped up: the Bierkoning.

Familiar face
Those who visited our own bar regularly in the nineteen years since 1995 might encounter a familiar face when stepping into the Bierkoning: Ton’s. The brutal bearded bartender decided to focus entirely on the illustrious beer store a couple of years ago. He has been with them now almost as long as he was with us. “Belgian beer didn’t exist”, Ton recounts his early days as a beer seller. “You could get a Koninck, Duvel, Palm or a Mort Subite and that was about it. A few small Dutch breweries just started and you find their beers in a couple of cafes. But the Bierkoning already had a lot more than that at the time.” Even now, with Amsterdam supermarkets fully stocked with craft beers from all over the world, the Bierkoning still has a lot more than any other store selling beer. Remarkable, as the beer is stocked in a tiny shop of no more than a couple of square meters. Yet, they sell around 2200 different beers. As a result, it has built a unique reputation over the past three decades. “It was the first beer store of Amsterdam, of Europe”, Ton explains, “probably of the world.” Sounds unlikely? “We never heard about other beer stores that were as specialized as we are.”

International & local heroes
When now widely known and respected American craft beer pioneers crossed the Atlantic to explore European possibilities, the door of the Bierkoning was the first Dutch one they knocked on. Ever since the famed Belgian lambic brewers of Castillon release an exclusive beer on numerous locations, the Bierkoning organizes the Amsterdam version of the event.

The store is cherished institution among local brewers too. Many an upcoming Amsterdam brewery had its first bottles sold at the tiny store. “They all know us”, says Ton, “they know who they deal with.” The Bierkoning was also among the very first to sell our own very first bottles, the respective owners of brewery and store knew each other well and the bond is still there. “Due to me, of course”, Ton grins.

Our Bierkoning beer
There is something else, even stronger than Ton perhaps, that still ties us together: Vlo. With great irregularity, we have been brewing this beautiful herbal amber especially, yet not exclusively, for the Bierkoning for ages now. Good news for eager fans of the Vlo, we will release again of the 18th of December.

But there is more good news: the Bierkoning has just opened a second store. Just around the corner of our very own breweries, on the Czaar Peterstraat, 223. Another great reason to come to the eastern part of town. 4 comments on "The Bierkoning: Amsterdams most famous beer store"