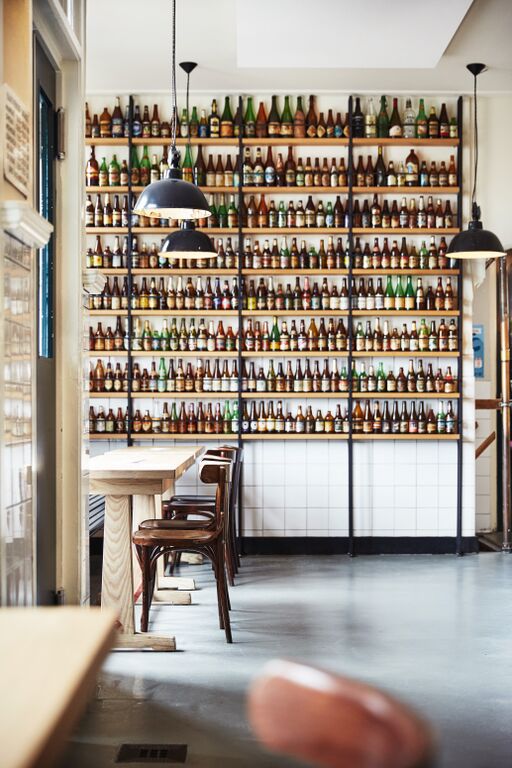 Everyone who ever visited our pub right under the windmill has seen them. The bottles. Ever wondered where they all came from? We asked the man who brought in the first bottles three decades ago what happened.

It is hard to imagine these days but there was a time when a cafe offering seven different bottled beers was an exciting thing. Gijs was a student when he first walked into such a place. It was 1977, so he got excited about the range of beers and took his first bottle of “special” beer, a Löwenbräu, home after he emptied it. A Guinness followed, and then a Westmalle. Then he discovered a liquor store. Then he brought back bottles from trips, and so did his friends. Gijs hitchhiked through Belgium, visiting Trappist monasteries and collecting rare bottles in the process.

He drank the content of every bottle himself before it joined the collection. A rule he never broke. The collection grew. Fast. It filled a wall and then walls. When Gijs and his girlfriend started to live together, the bottles had to find a new destination. She had different ideas about how to use walls.

In the exact same period, a new brewery opened, right next to a windmill. Gijs got on his bicycle and paid the former bathhouse a visit. Founder Kaspar Peterson wasn’t too wild about taking over some thousand empty beer bottles, initially. The promise that Gijs would remain the owner of the collection and would take charge of a decoration project of sorts, made him agree. Eventually, it all resulted in a personal click, a key to the brewery and a sense of “corporate pride”.

Gijs stayed, even after Kaspar sold the brewery and new owners Bart and Patrick expanded and renovated the brewery. The bottles were packed and unpacked several times. Some broke, some got stolen, but most stayed. Some are still stored downstairs, for lack of space. But the majority, more than two thousand bottles from over a hundred countries, is visible to everyone who comes to drink a beer at our pub. Which is, as Gijs reminds us, still the most important part of the whole experience. Decoration like this, though, helps too.