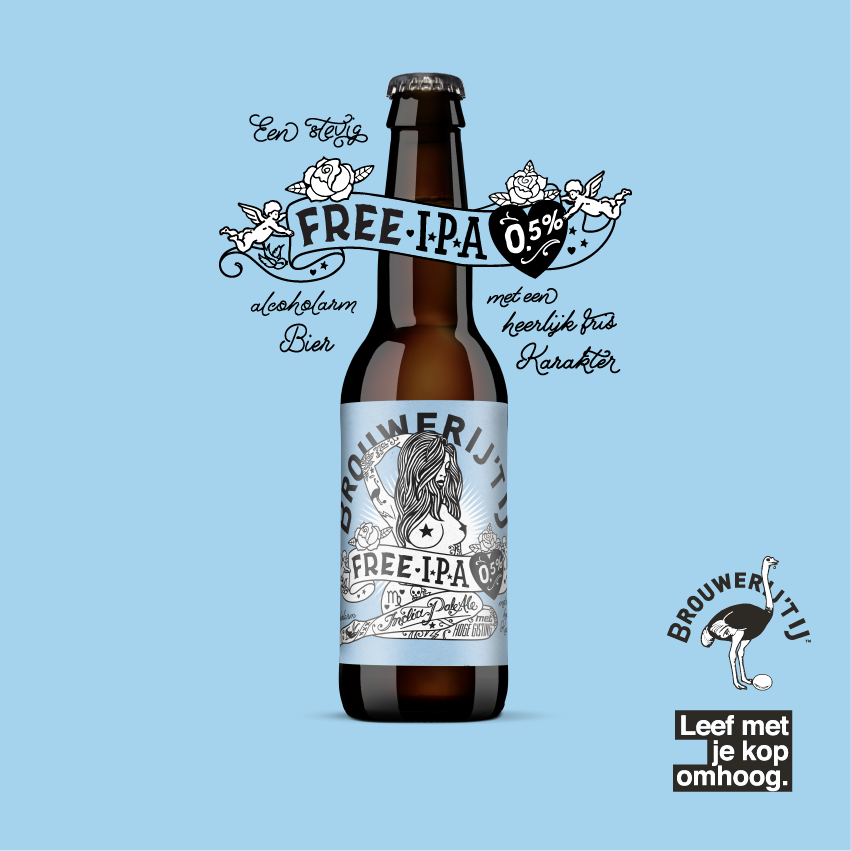 The newest member of the IPA family: Free IPA 0.5% alcohol

Posted by brouwerijhetij in News On Oct 30 2020

Times change and that is why Brouwerij ‘t IJ is introducing its newest beer early November: Free IPA 0.5%. A low-alcohol IPA, brewed with Amarillo hops, full of tropical flavors and a light bitterness.

The beginning of the IPA family
In 2012, after an inspiration tour through the US, we launched our IPA with an illustrious black label. Owners Bart and Patrick came back from their tour with the idea for a beer that would deviate from the existing range of beers, which until then were all brewed according to the Belgian style. India Pale Ale is the future, they predicted. Now, in 2020, this fresh-bitter beer segment is indeed an indispensable part of the beer fridge.

Session IPA
Yet not only IPA was the future, the future also brought us the popularity of specialty beers with a low alcohol content. More and more people were asked in the tasting room about beers with less or even no alcohol. To answer this structural demand, the brewers came up with a Session IPA of 4% alcohol in 2019. Session IPA has a lot of flavor like a real IPA, but so light that you can drink it a little more often.

Free IPA
And now there is Free IPA. This IPA also has the full flavor of the original, but now the alcohol has almost completely disappeared. With its recognizable light blue label, we expect a lot from this new family member, which – with an alcohol percentage of 0.5% – is perfect for the times you are not into alcohol and is a good alternative on the terrace when work still needs to be done.

Low alcohol vs. alcohol-free
Interestingly, beer with an alcohol content of 0.5% is simply called alcohol-free in surrounding countries. This may even be indicated on the label and sold in the Netherlands. In the Netherlands we have many of these foreign beers on the menu (which are actually not alcohol-free at all, but low in alcohol). In Austria, Belgium, Finland and Germany, non-alcoholic beer may contain a maximum of 0.5% alcohol. Spain has a limit of 1% and Italy and France apply the threshold value of 1.2% alcohol. However, Dutch brewers are only allowed to put alcohol-free on their labels if it contains less than 0.1% alcohol. So there are stricter rules for Dutch brewers.