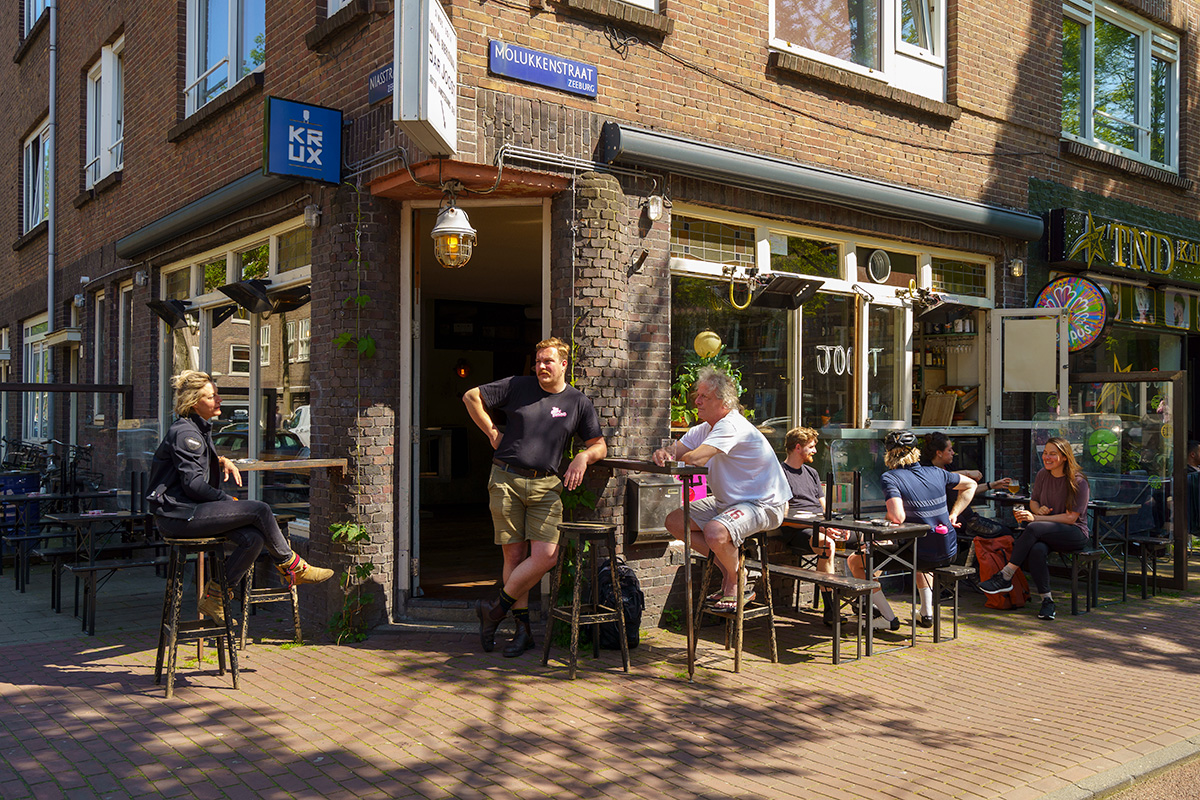 Posted by brouwerijhetij in News On Jul 01 2021

Before we updated the labels on our beers, our iconic ostrich was depicted in an empty, arid desert. Legend says that was a reference to the monotonous landscape of Dutch breweries in the mid-1980s, when very few people were brewing interesting beer. But that slowly began to change after our ostrich built its nest in the former bathhouse in Amsterdam-Oost.

Several breweries popped up in the decades that followed, and Amsterdam’s east side still seems to be a popular nesting ground for brewers. Some of our most interesting colleagues in Amsterdam can be found just down the street from the characteristic windmill where it all began for us. Now that the sidewalk cafés are open again and the sun shines until late at night, it’s a good time to take a walk along all the breweries in Amsterdam-Oost.

The ideal first stop for those coming to the neighbourhood from the west or by train is Brouwerij Homeland. That’s because the pension where they tap their own beers is located exactly halfway between Amsterdam Centraal Station and our tasting bar De Molen. We’ve mentioned our colleagues before, when they were only brewing two small batches of their own beer. But since then, they’ve expanded to fill their own ‘beer wharf’ on the former Navy base. They’ve added more kettles and a canning line that’s rolling a wide selection of colourfully nautical beers out into the city.

If the sun’s shining on Homeland’s terrace, then you can’t go wrong by ordering a Ketelbinkie and let your tongue be tickled by the fruitily effervescent extra-light New England IPA. At 3.5%, Ketelbinkie is a light breeze among beers, so you won’t feel like you’re fighting heavy seas as you walk to the next stop. And after a beer at the old Navy yard, you’ll have an even greater appreciation for the view of the replica East Indiaman ‘Amsterdam’ at the National Maritime Museum and the towering copper-bottomed bow of NEMO. As the temperature rises, don’t be surprised to see everyone in Amsterdam cooling off in the harbour in their hottest swimwear.

When you’re done at Brouwerij Homeland, leave the Navy yard and walk towards the National Maritime Museum and you’ll eventually notice the De Gooyer windmill rising up over your left shoulder. Walk in that direction and you’ll end up at our very first brewery. Our tasting bar de Molen has been a favourite meeting place for locals and tourists, students and old Amsterdammers, artists and builders for decades.

If social distancing isn’t required by then, simply take a seat next to someone at the long tables on our terrace. Most of our classic beers will be available on tap, and we’ll probably have a special or two brewed especially for the tasting bar. But be forewarned: you might end up sitting here a bit longer than you’d planned. We return to our ‘normal’ opening hours, we’ll close our doors at eight o’clock sharp, when the night is still young and Amsterdam-Oost has plenty of other places to visit.

The most obvious choice at that point would be Poesiat & Kater. If you don’t dawdle, you can get to the former animal shelter in the 19th-century building in around 15 minutes. This is where our former brew master Julian breathed new life into the old brouwerij de Gekroonde Valk. He still brews some of his predecessor’s classic recipes, but using contemporary brewing techniques and ingredients.

Their flagship beer is the Van Vollenhove Stout, a once-popular Dutch classic that almost faded away into obscurity. But Julian doesn’t focus blindly on the past. The PhD in Molecular Biology is just as happy to experiment with traditional ingredients as he is with the unconventional. That often results in subtle, finely crafted beers like the Little Smuling Session IPA; a low-alcohol bitter with hints of tropical fruit that make it a great choice for a sunny terrace.

A bit farther away, but just as close to our hearts, is Krux, a brewery-plus-tasting-bar like ours in the old bathhouse under the windmill. Inspired by what he was drinking on our terrace one day, Ward decided to found Bruut Bier. He took the idea seriously, and he and his partner set off for Belgium to learn the tricks of the trade. And with success: his amber Gajes was officially named the ‘Best Beer in the Netherlands’.

He’s carried on in the same vein with Krux, but with the addition of the people at Bar Joost he’s found cronies who know how to get people drinking beer in Amsterdam. And their work is in high demand on the Cruquius island, where the sterile modern architecture could definitely use some livening up. The Krux ‘brewery wharf’ is housed in the historic Huisje Insulinde, a renovated factory office building. Here, in the smallest brewery installation in the city, you can sometimes taste the subtle Belgian influences in beers like the smooth, hoppy seasonal beer Gistslijter. It’s a great thirst-quencher at the end of the working week. And if you’re lucky, maybe there’ll be a band playing on their terrace!

Right smack in the middle of this ‘Beer-muda triangle’ is the aforementioned Bar Joost, which is a great pit stop on your way to or from de Molen, Poesiat & Kater and Krux. It’s a neat, cosy neighbourhood café, but one where they serve a wide selection of cold beers from breweries all over Amsterdam.

We hope that the coronavirus statistics start to fall as the temperature rises, and we look forward to the day when you can just wander in to Amsterdam’s breweries to chill out on the sultry summer evenings.

Until then, the terraces at our tasting bars are open until 20:00!