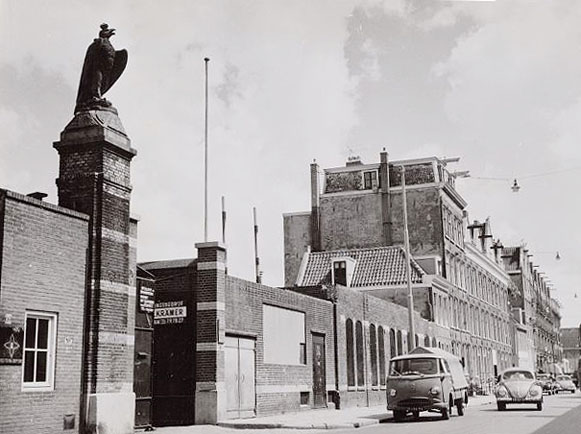 The Crowned Falcon, Amsterdam brewing history around the corner

It is hard to imagine but the calm residential area around the Hoogte Kadijk, a stone’s throw away from our own brewery, was once the bustling site of what was then Amsterdams biggest brewery. Little signs of that era remain except for a high stone pillar supporting the massive statue of a crowned falcon. That pillar once formed part of the majestic entrance of the brewery of which the falcon is a symbol: de Gekroonde Valk (the Crowned Falcon). The story of the steady rise and long fall of this brewery starts in 1733. The founder decides to combine brewing beer with producing vinegar as the 18th century is far from ideal for Dutch brewers: malt expensive, jenever – the main alternative choice of booze – cheap.

Despite these unfortunate circumstances the Gekroonde Valk was soon successful. By the second half of the century it was among the preferred brewers of choice of the globally influential Dutch East Indian Company and Falcon beer was consumed all along the route to the Far East.

A Rotterdam entrepreneur by the name of Van Vollenhoven, who bought the company in 1791, had his family name included in many of the brewery’s brands. Not much of a surprise then that the brewery remained a family company. With the passing of generations a growing number of people drank its beers, especially a deep dark, supposedly healthy, beer: the Van Vollenhoven Stout.

The scientific innovations of the 19th century, such as steam machines and methods to control yeast, offered possibilities to increase efficiency. But they also demanded investment. Just by the time the new man in charge, a certain Willem Hovy, had turned these possibilities to the brewery’s benefit, a new challenge arrived.
It came by train, from Germany, and by the name of what was then known as “Bayern beer”. Today we know this bottom-fermenting beer as pilsner. Its arrival was linked to new cooling techniques, for its fermentation depended on low temperatures.
A man called Gerard Adriaan Heineken was one of the first to recognise the popular appeal of this thing called pilsner. He instantly bought the brewery of one of the Valks competitors and invested heavily in cooling machinery. The Gekroonde Valk’s most prominent rival established itself as such in 1863 and waged an almost constant war onwards.

At the same time, Willem Hovy, director of the Gekroonde Valk, fought a second, more spiritual, battle on another front. A deeply religious man, Hovy was very concerned with the godless way of life of Amsterdams lower classes. He pioneered an early form of corporate responsibility in order to create the socio-economic ground on which moral education might bear fruit. This meant, in practice, that people employed in his brewery enjoyed all kind of benefits foreign to most of their contemporaries: fixed wages, a pension fund, something like a disability insurance and paid leave during Christian holidays. In addition, Hovy build his employees a whole block of affordable housing on the nearby Czaar Peterstraat. Driven by the view that the desired moral improvement should not remain confined to his brewery’s walls, Hovy teamed up with the influential preacher and politician Abraham Kuyper. Something of his financial wingman, Hovy provided Kuyper with funds wherever needed and proved instrumental in the establishment of Kuypers Free University, still one of Amsterdams two main universities.

His strong faith did in no way interfere with his large production and sale of alcoholic beverage. In fact, he considered his beer the perfect weapon in the war on the large scale consumption of jenever of the day. Moreover, he seemed to have genuinely believed that his beer was a healthy and nutritious drink and enthusiastically had it advertised as such.

The traditional emphasis on health in the advertising started to backfire in the early 20th century, the period in which consumers started to value taste and image more than before. It was one of the many blows from which the brewery would never recover. Hovy had died in 1915 and so had the rosy prospects abroad. The First World War, the uncertain decades that followed and an expensive guilder had the Gekroonde Valk lose much of its formerly substantial foreign markets.

With the decreasing popularity of the Van Vollenhoven Stout added to this fatal mix, the brewery soon lost most of its competitive power within the Netherlands too. Pilsner giants Heineken and Amstel started to divide the Dutch market amongst themselves and slowly pushed out the giant from a different era.

The Gekroonde Valk finally stopped production in 1949, the bustling industrial site turned into a deteriorated neighbourhood, the proud statue of the falcon decorated the South African garden of one of Hovy’s grandsons. Only the stone pillar that held the bird remained.

The neighbourhood was renovated in 1980s but the stone pillar could only be saved of demolition in case residents would propose a befitting “cultural” function. This led into some digging into the longer version of the story lined out above and eventually to the rediscovery of the falcon statue. A copy was made in South Africa and the exact doppelganger of the falcon flew back to Amsterdam to land on its pillar. During the celebration of its return, in 1993, substantial amounts of Van Vollenhoven Stout were consumed. It tasted good and the residents now united in a foundation decided not to have the flight of the falcon end there. When Heineken stopped the production of Van Vollenhoven Stout, which they had continued to brew until 2004, the foundation acquired the recipe. Since then a limited amount of stout has been brewed annually and poured in a small number of selected cafes.

Again, it tasted too good to leave it just there. The foundation has therefore started work on a future brewery that should be producing its own Van Vollenhoven beers. Installation and adjacent tasting room will be housed in a classy 19th century building that used to house an animal asylum before. From the end of 2016 onwards though, it will all be about a falcon again.

Want to know more about the new Van Vollenhoven beers? Check out the project’s website.

Interested in a more extensive history of the Gekroonde Valk? There is a (visually rich) book (in Dutch), which can be ordered online. Here, for example.

One comment on "The Crowned Falcon, Amsterdam brewing history around the corner"