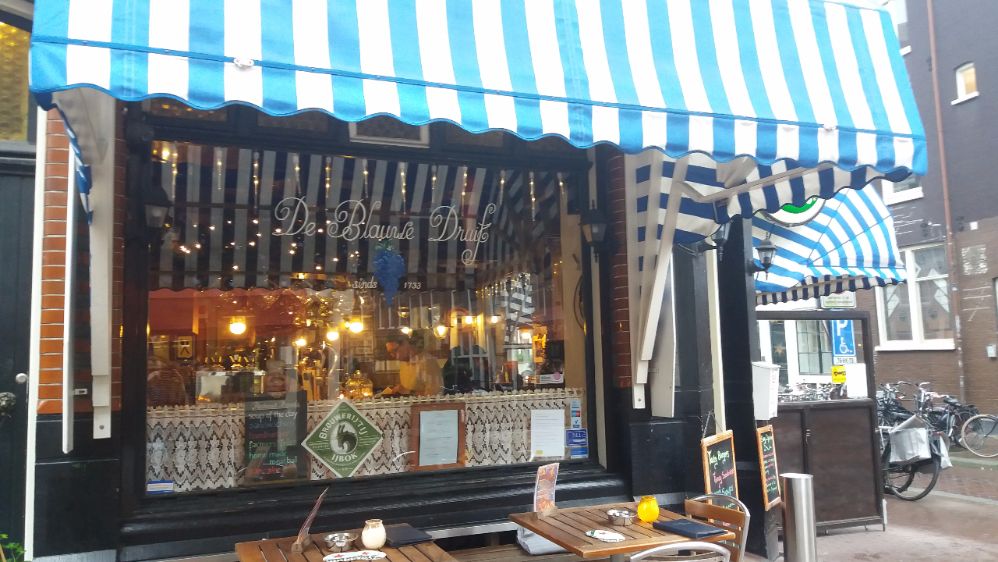 Back in the day, the IJ river was the point of departure for a great many sailors that set out to sail the world from Amsterdam. Those who wanted to embark with one of the Dutch trading companies, had to register at specific cafes which they could recognize by a bunch of grapes. De Blauwe Druif (the Blue Grape), established in 1733, is supposed to be one of these bars where the down-and-out applied for hazardous maritime adventures. “That’s the story”, Sandra says and she shrugs. “Wasn’t there, can’t tell.”

Transformation
Sandra arrived in 1988, when the neighbourhood had its share of a new kind of rowdy figures. “The street was full of prostitutes, pimps, junks, you name it.” She realized things could only get better and decided to buy the age-old sailor bar. First years were tough, trying to make money flow in while keeping the trashy types out, but she persevered and slowly saw the neighbourhood and her fortunes change for the better. The Haarlemmerstraat, where the Blauwe Druif is located, bustles with a different crowd these days. Upmarket clothing, culinary places, gift and book stores lure residents and visitors that are happy to spend some money on a good plate of food and a drink to match. Sandra happily caters for them with a menu ranging from the regular bar food to home-made soups and complete meals.

While the Blauwe Druif is that type of bar locals associate with pilsener, they sell a modest number of other beers too, amongst which are some of our own. “It’s great beer, it’s tasty and it has a great number of good stories behind it. We often refer to the river the brewery is named after, it runs just across the street. From there you can guide people across the water, to the north side, where they can find more beers and breweries.”

Family
Sandra employs five other people who know just as much or even more about the beers they pour at the Blauwe Druif nowadays. “I won’t call them employees”, she says, “they are much more like family.” You sense that in the homily atmosphere of this cosy yet quirky –it has furniture on the ceiling – place. As a result, the regulars still squeeze themselves amongst the tourists here, hoping to catch up with Sandra or one of the other members of this warm-hearted family. Perfect little harbour for those lost on the Haarlemmerstraat.